When your browser is loading your page, text content may be ready for painting before your webfonts have fully downloaded. In these situations, your text remains invisible or hidden from the user for a brief period until your webfont has downloaded. This issue is known as the Flash of Invisible Text (FOIT).

Ensuring your text remains visible as the webfont loads, helps in preventing blank pages and unnecessary layout shifts for a better page experience.

For pages with text that use webfonts, the browser cannot render said text until the webfont is ready.

In many cases, the text is usually ready before the webfont has loaded. The browser pre-emptively creates the space for the text even though the webfont isn't available, thus resulting in the Flash of Invisible Text issue. 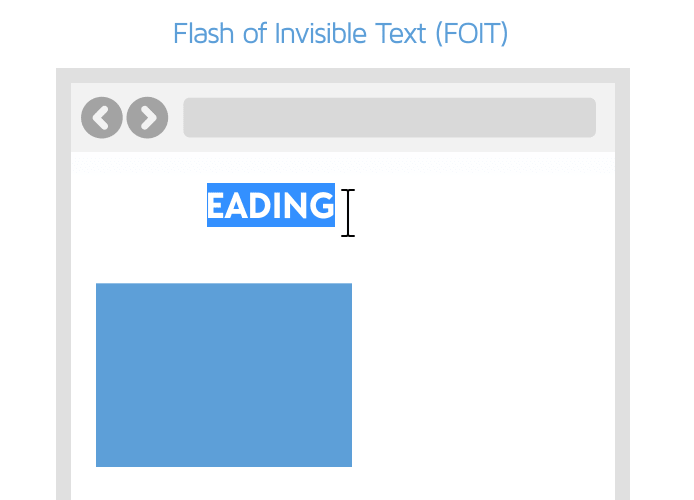 Text has loaded and can be highlighted; however, remains invisible as the font has not loaded yet to style it.

Preloading web fonts and using font-display can help overcome this issue by displaying text with system or fallback fonts until the browser can render the content with the requested webfont.

This helps prevent unnecessary layout shifts for a fast and (according to Google) 'delightful' page experience.

The Flash of Unstyled Text (FOUT) is a similar issue to FOIT, and is also caused by fonts failing to load in time.

The Flash of Unstyled Text (FOUT) is a similar issue resulting from fonts failing to load in time, however the visitor is still able to read the text during load.

However, your page visitors can still read the text during the page load, as the closest available font is used to display the text.

Note that FOUT's impact on web performance is less pronounced compared to FOIT.

GTmetrix identifies all the webfonts declared in the CSS and checks to see if a font-display attribute has been specified for each webfont with either of the following values:

If GTmetrix finds even one webfont URL without the above declarations, this audit triggers. Clicking the audit reveals the list of webfont URLs.

How to ensure text remains visible during webfont load?

There are a few strategies to ensure text on your page remains visible during the webfont load, such as:

You can preload webfonts that are immediately needed during page load by adding the following link tag to your HTML header:

The font-display attribute determines how the font is displayed during your page load, based on whether it has been downloaded and is ready for use. It takes the following values:

Click here to learn more about font-display and its browser compatibility.

If you are using Google webfonts on your page, you can add font-display functionality by adding the &display=swap parameter at the end of your webfont URL in your CSS.

where googlewebfonturl is the URL of your chosen Google webfont.